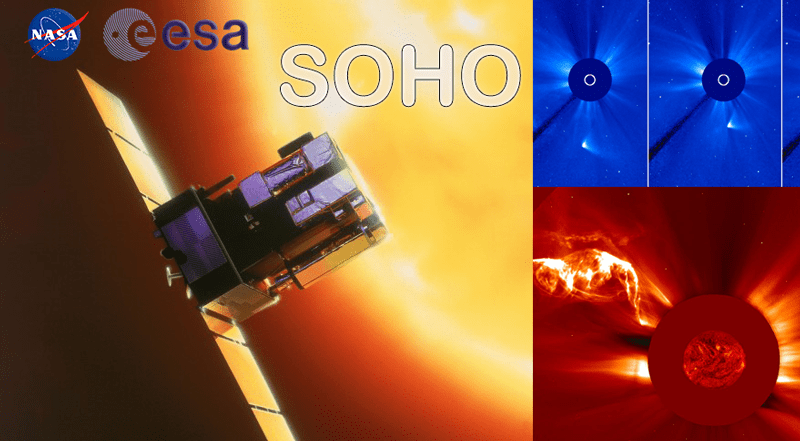 About the Solar X-ray status monitor

The X-ray Solar status monitor downloads data periodically from the NOAA Space Environment Center FTP server. The previous 24 hours of 5 minute Long-wavelength X-ray data from each satellite (GOES 8 and GOES 10) is analyzed, and an appropriate level of activity for the past 24 hours is assigned as follows:

About the Geomagnetic Field status monitor

The Geomagnetic Field status monitor downloads data periodically from the NOAA Space Environment Center FTP server. The previous 24 hours of 3 hour Planetary Kp Index data is analyzed and an appropriate level of activity for the past 24 hours is assigned as follows:

Some information about SOHO

The Solar and Heliospheric Observatory (often abbreviated to SOHO) is a space telescope launched in late 1995 to study the Sun. It is a joint project of the European Space Agency (ESA)  and NASA.

SOHO simultaneously studies many aspects of the Sun, from the structure and dynamics of its interior to the solar wind. Great attention has been paid to the attempt to solve the biggest problem of solar physics, which concerns the temperature of the corona, the outermost layer of the atmosphere. This has in fact a temperature of over 1 million kelvin, compared to less than 6000 of the surface below. For now, a convincing solution has not yet been found, but SOHO has identified some magnetic energy transmission channels from just below the surface to the corona.

Precisely because of the desire to study many aspects of the Sun, the probe carries as many as 12 different scientific instruments, each of which can observe the Sun or parts of it independently. The instruments are:

The EIT is the SOHO tool that has produced the most spectacular results. It is able to capture detailed images of the entire solar surface in ultraviolet light; in this way, it is easy to detect bumps and flares, highly energetic phenomena that affect the entire solar atmosphere.
The images show the Sun at different temperatures, the higher the temperature the more we can see in the Sun’s atmosphere.

The LASCO is a degree of capturing images of the solar corona thanks to a disc that creates an artificial eclipse, whose position is highlighted in the images with a white circle. The shadow in the lower left corner is the support for the central disk.
The LASCO is mainly dedicated to the study of the Sun’s corona and the solar wind. Occasionally it is possible to observe mass ejections from the solar corona, which expand throughout the available field of view. The C2 images show the sun from 8.4 million kilometers, while the C3 images from 45 million kilometers.