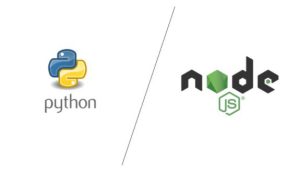 Node.js and Python are two of the best back-end technologies. There are no “better” or “worse” programming languages, according to popular belief, and it all relies on the tastes of each developer.

Node.js is a server-side platform based on the JavaScript Engine in Google Chrome. It employs an event-driven, non-blocking I/O architecture. It enables developers to design real-time data-intensive apps that run across several devices. JavaScript is used to create its applications. It has great compatibility with Mac/ Operating System, Microsoft Windows, and Linux. It is a popular platform for running real-time server applications.

Python is a high-level, dynamic, object-oriented, and multifunctional programming language. Python is a good language for scripting because of its syntax, dynamic type, and interpreted nature.

Object-oriented programming, functional programming, and procedural styles are among the programming paradigms it supports. Furthermore, it is an interpreted language, which means it cannot be converted to machine-readable code before being run. 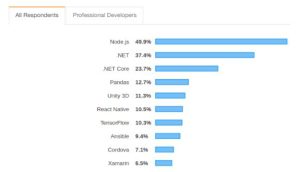 Here is how NodeJS and Python differ:

Node.js is an event-driven system that allows for asynchronous input/output. The thread is not blocked since a process is invoked as soon as the event happens. Node.js’ event-driven architecture is ideal for creating chat applications and games on the web.

Python, on the other hand, is not designed in this way. With the help of specific tools, you may employ them to create asynchronous and event-driven software. Asynchronous code can be written in Python using modules like asyncio, just like it can be done in Node.js. However, because most Python platforms do not include this module, it will take some more effort.

The event-driven architecture aspect keeps Node.js in a favorable position.

The majority of the time, the syntax is a question of personal preference. It is incorrect to state that one is superior to the other. The syntax of Node.js is quite equivalent to that of JavaScript in a browser. As a result, if you know JavaScript, you will have no trouble learning Node.js.

The syntax of Python is frequently regarded as its strongest feature. Software developers writing Python programming need to write fewer lines of code than those writing Node.js code. Python’s syntax is fairly straightforward and devoid of curly brackets.

As a result, reading and debugging the code is significantly easier. Python code is easily readable and that is why even non-technical clients can understand it. It is, however, a matter of preference once again.

Therefore, beginners will benefit from Python’s syntax because it is easier to understand and learn.

First and foremost, Node.js’ performance is outstanding because JavaScript code is interpreted by the V8 engine (in which Google has invested substantially). Second, since Node.js processes code outside of the web browser, the app consumes fewer resources and performs better. TCP sockets, for example, are not available in a browser. Third, because the event-driven non-blocking design allows several requests to be performed at the same time, code execution is sped up.

Python and JavaScript are both interpreted languages, which means that they are slower than compiled languages like Java. In this example, Node.js triumphs over Python. Python is a single-flow language, unlike Node.js, and requests are processed substantially slower. Python is therefore not the ideal choice for projects that value speed and performance or require a large number of sophisticated calculations.

Web applications written in Python are thus slower than those written in Node.js.

In terms of performance and speed, Node.js has an upper hand because it is faster.

Node.js is simple to adapt, expand, and combine with a variety of technologies. Built-in APIs can be used to construct HTTP or DNS servers, which can be extended further. It can be used in conjunction with Babel (a JS compiler), making front-end development with previous versions of Node or the browser much easier.

Unit testing is made easier with Jasmine, while project monitoring and debugging are made easier using Log.io. Migrat, PM2, and Webpack can be used for the migration of data, process management, and module bundling. Express, Fastify, Meteor, Koa, Hapi, Restify, Nest, and more frameworks can be used to expand Node.js.

Python was first released in 1991, and it has since spawned numerous programming tools and frameworks. Python, for example, can be used with Sublime Text, a popular code editor with additional editing tools and syntactic extensions.

The Robot Framework is a tool for automating tests. Django, Flask, Pyramid, Web2Py, and CherryPy are just a few of the sophisticated web development frameworks available.

As a result, both systems are easily deployable.

The Node Package Manager (NPM) in Node.js is in charge of libraries and packages. It is one of the largest software library repositories. NPM is simple to use, speedy, and well-documented.

Pip, which stands for “Pip installs Python”, manages Python libraries and packages. Pip is quick, dependable, and simple to use, making it simple for developers to pick up.

Node.js and Python are neck-and-neck when it comes to Libraries.

Node.js is mostly utilized in the construction of web applications’ backends. However, you use JavaScript for front-end development, therefore the front-end and back-end share the same programming language. You may use Node.js to create not only web apps, but also desktop, hybrid, and hybrid mobile apps, as well as cloud and IoT solutions.

Since Node.js is cross-platform, a developer may write a single desktop application that can run on Windows, Linux, and Mac. As a single team of developers can handle everything, universality is a wonderful method to cut project costs. This is one of the reasons why businesses are preferring to hire node.js developers.

Python is a full-stack programming language, which means it can be used for both back-end and front-end work. Python is cross-platform, similar to Node.js, therefore a Python program created on a Mac will run on Linux. Python comes pre-installed on Mac and Linux, but you must install it manually on Windows.

Python is excellent for website and desktop development, but it falls short when it comes to mobile computing. As a result, most mobile applications are not written in Python. Python’s use in IoT and AI systems is growing at a rapid pace.

Node.js and Python are almost identical in terms of universality.

Beginning developers can quickly learn Node.js because it is based on JavaScript. Node.js is not much difficult to learn after you have a basic understanding of JavaScript. Node.js is easy to set up, although it does introduce some difficult concepts. It may be difficult to grasp its event-driven architecture, for example, at first. Although the event-driven design has a major effect on app performance, it takes time for developers to learn it.

If you do not know JavaScript and must choose between Python and Node.js, go with the former. Python’s syntax is straightforward and succinct, making it easy to learn. In most cases, writing a function in Python takes fewer lines of code than developing a function in Node.js. However, this is not always the case, as the length of your code is heavily influenced by your programming style and paradigm. There are no curly brackets like in JavaScript, which is a bonus.

It is difficult to determine which is easier to learn: Python or Node.js. It is also a question of taste.

Both Python and Node.js are popular and powerful web and backend programming languages. There is no clear winner; it all depends on the use case or situation at hand. It is also a good idea to think about how comfortable you would be using any of these technologies.